The XFM1 transmitter is a crystal controlled tone modulated FM transmitter designed for model rockets but suitable for wildlife, balloons and many other applications requiring a small, frequency stable FM transmitter. Use this transmitter with a scanner or 2 meter amateur radio receiver. Transmitter ground range is approximately 400 yards (5 feet above ground) . Field tests were done with a ICOM IC-W32A transceiver with 0.16 micro volts of receiver sensitivity through the standard 8 inch antenna. Air to ground transmissions can improve range significantly as will a directional high gain antenna or a more sensitive receiver.

The transmitter is a crystal controlled 147.455 MHz FM transmitter.  The transmitter is tone modulated by a 12F675 microprocessor approximately every two seconds. A Morse code call sign ID is transmitted approximately every 30 seconds. If a call sign has not been specified it will transmit “XFM1”.  The transmitter is turned off between tone bursts which greatly extends the battery life. The circuit is designed to use a low cost “computer crystal” 49.152  Mhz (3rd over tone), However, custom crystals can be used if other frequencies are desired. If other frequencies are desired a 3rd overtone series crystal can be ordered from a crystal manufacture.

Microcontroller
The transmitter is controlled by a program running on a PIC12F675 micro-controller.  It generates the "beep" tones approximately every 1 to 2 seconds an a station ID every 16 "beeps".  If no call sign is designated it transmits "XFM1".
The source code is available at www.jbgizmo.com .  The programmed  PIC 12F675 microcontroller is included with the kit or can be ordered separately (X!-PIC) .

NOTE: Be aware that the small size of the circuit requires that GREAT CARE be taken to prevent solder bridges when soldering. Use a 20 to 40 watt soldering iron with a pencil sharp point; trim all leads after soldering and check each solder joint with a magnifying glass for bridges and solid connection.

Please refer to the "Component Side View" illustration when installing parts. All components are installed on the blank side of the board (not the foil side).

When installing components bend the leads to match the hole spacing. Push the leads through the holes at the proper location being careful of polarity on the IC and transistor.

Solder the leads on the foil side of the board being careful not to produce solder bridges. Trim all excess leads immediately after each component installation

Note: There are 8 solider pads that may not be drilled (have no holes) . These pads are for use by anyone that would like to extend the design of the transmitter through their own experimentation and programming. These pads provide easy access to the other pins on the PIC chip and can be programmed for analog inputs or Digital I/O by the knowledgeable experimenter. If you are not interested in experimenting with the programming you can use the circuit as-is in the basic tracking mode.

NOTE:  In some circuits the transmitter will not turn off after "beeps" or after completing the call ID.  This condition can be corrected by adding a 15 pF capacitor at the location marked on the parts placement diagram( parallel to L1 and C2).  Holes are provided for this installation.  This condition can also be caused if the bottom battery touches the battery hold down wire.  Make sure the battery hold down wire's vertical length is insulated as instructed.

Have someone hide the transmitter and practice finding it before you use it on a mission. Note: there are several good references for radio direction finding (RDF) that you may want to read. The ARRL Handbook has a chapter on RDF and can be found in most public libraries. Transmitter Hunting, by Joseph Moell, K0OV and Thomas Curlee, WB6UZZ is also a good book on the subject. Both books can be bought from

Radio direction finding is best accomplished by using a receiver with a directional antenna like a “beam” or “Yagi“antenna, however a monopole antenna can be used by employing the “Body-Fade” method. Instructions for building an inexpensive RDF Yagi type antenna can be found at  Joe Leggio's (WB2HOL) web site.  You might also need an RF attenuator for when you get close to the transmitter (check Joe’s attenuator plans).

If you use your body to shield the receiver’s monopole antenna a cardioid sensitivity pattern (see picture) is achieved.  The peak null position is approximately 180 degrees opposite the transmitter location. (Note that the patterns are not always as shown. They can vary depending on the antenna, the way it is being held and objects in the area that may reflect the signal).

The operator should take a reading by holding the receiver close to their stomach   The antenna should extend vertically and be about 6 inches in front of the body.  Turn slowly listening for the strongest signal (loudest beeping) or highest reading on the “S“ meter.  Move in the direction of the strongest signal (opposite the direction of the weakest signal).  Periodically stop and take another reading, adjust the course and continue to work towards the transmitter.  Since the “null” point is much narrower than the maximum signal point it may be easier to use the “null” point to establish the most accurate direction to the transmitter. With a little practice a person can become quite efficient in locating the transmitter although the path taken will be somewhat zigzagged. 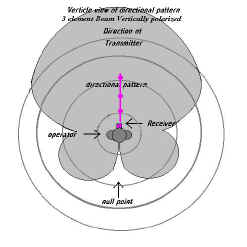 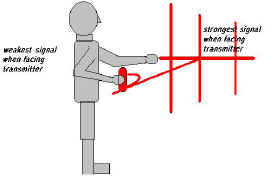 To achieve adequate performance you will need a receiver with at least 0.16 micro volts of sensitivity. Most 2-meter Amateur (ham) radios are at least this sensitivity. Scanners may or may not be sensitivity enough. 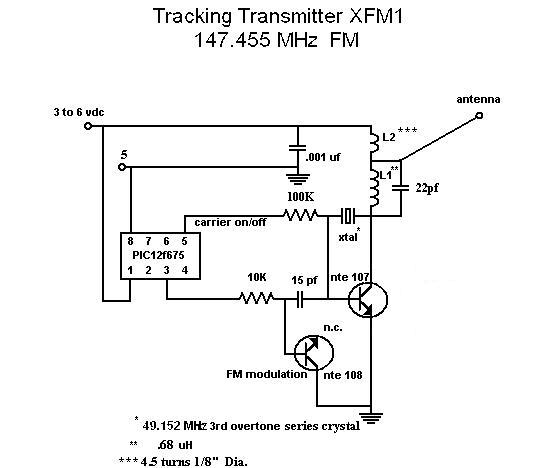 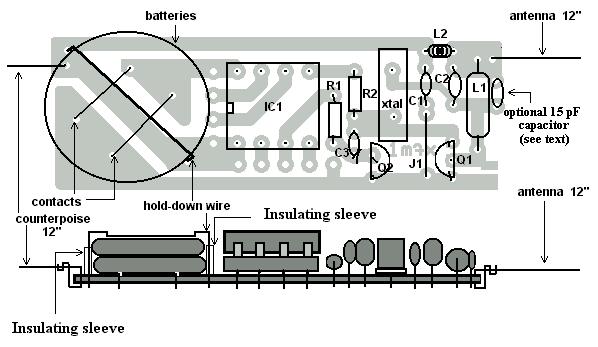