Update#2 - Inexpensive computer crystals can be used in this circuit.  See "transmitter" secession for parts reference or click link.

The following files and "Quick" plans describe a telemetry system consisting of a transmitter with "interchangeable" sensor modules.  Range is 1600 feet (6 ft above ground to 6ft above ground) and 2500 feet air to ground (as measured using a ICOM  IC-W32A HT with the standard 8" antenna.  It might be higher.  This is the maximum altitude tested so far).

This is still a a-work-in-process so your comments will be appreciated. e-mail to   jerry_baumeister@msn.com

You can use a microprocessor crystal (48 MHz series or 48MHz 20 pF) which cost about 85 cents from Mouser.com.  These crystals will result in a transmitter frequency of from 144.000 MHz to 144.010 MHz.  Be sure the frequency is clear when you use these crystals.  I have also had good luck with a 49.152 MHz 3rd overtone crystal (Mouser part# 815-ABLS-49.152-B2 and 695-HC49US-49.1).  The first is a surface mount type but you can carefully bend the leads out straight and use in this circuit.  The second is a leaded version.  They cost about 45 cents (so buy two).  These crystals will operate on 147.460 MHz.  You can order a custom crystal for a specific frequency from a crystal manufacture and can expect o pay about $17.50 each.

Microprocessor
The microprocessor is a PIC12F675 eight pin Flash microcontroller by MicroChip.  It was programmed with MicroChip's MDE-LAB in PIC assembler language on their Flash starter kit.  A copy of the source code is available for downloading, click telemetry.asm .

The program is structured as a series of "calls" to subroutines and is easily modified.  Basically the program:

Power Supply
The CS module with the sensors requires a regulated power supply and uses a 78L05 IC for this purpose.  The smaller "no-sensor" CS module  does not require voltage regulation, since it has no sensors, and can run directly from one or two BR1632 lithium "coin" cells.

The 23A "lighter" battery used on the larger CS module will only last about 1.5 hours with continuous operation.  So if longer operation is required a heaver battery like the common 9 volt radio battery can be used.  Of course this adds considerably more weight to the system.

Sensors
One of the CS modules has an atmospheric pressure sensor and a thermister for sensing temperature.

Data protocol
The data is transmitted in Morse code.  Morse code was selected in this design because it could be directly read without additional hardware and it could also be read using a wide array of software and stand alone hardware.  The rate of transmission is switch selectable at either 8 WPM for humans or 50 WPM for machine copying.

Data
The data transmitted is in the units produced by the Analog to Digital Converter (ADC) in the microcontroller.  Since the ADC is a 10 bit format it generates a number between 0 and 1024 which proportionally represents the voltage it measures, in this case the voltage generated by the sensors.  This data can be converted to altitude by downloading  Excel charts (AltConv.zip).  If you want to do the math use...

The Morse code data stream is as follows:

A method that works well in most cases is to suspend the module from the nose cone by the coiled counterpoise on the CS module, and extend the transmitter antenna out the bottom of the payload compartment and along side the fuselage.  The coiled counter poise provides a shock absorbing function during lift-off and the external transmitting antenna provides optimum range of transmission. 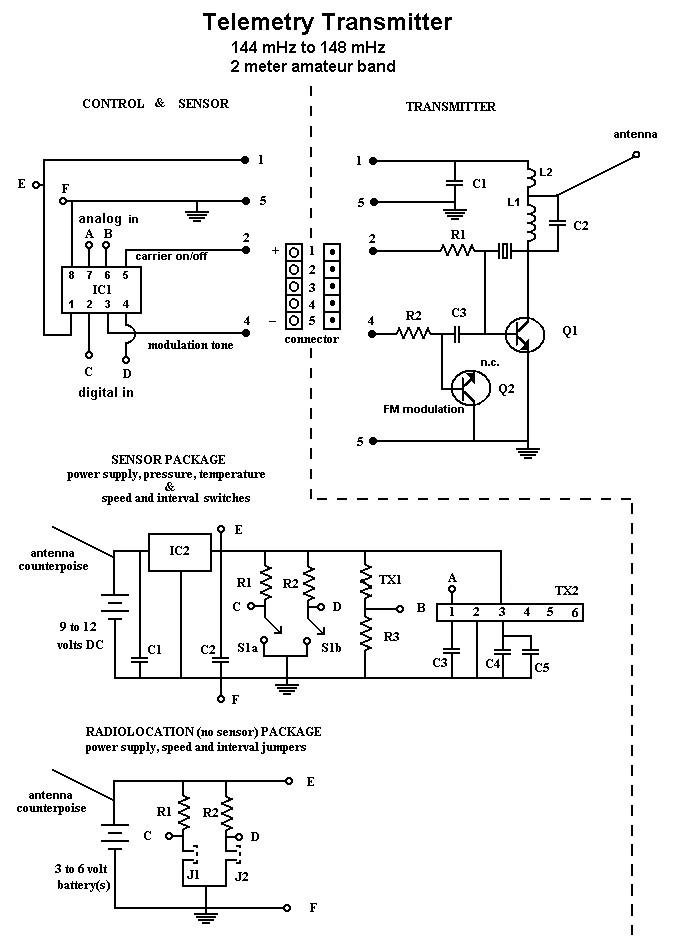